The point where the Atlantic Ocean meets the Pacific Ocean has provided trade routes between the East and West for over a century. Since the establishment of the Panama Canal in 1914, between 13,000 to 14,000 ships take the 8-10 hour trip through the canal every year1. The main eastern bound trade routes through the canal include those reaching the East Coast of the United States, Europe, the West Coast of South America, and Canada2. In 2014, 224,883,713 tons of cargo passed through the Panama Canal3. However, the canal has presented some complications. The canal itself is narrow and can be difficult for large ships.
In 2007, construction began to expand the Panama Canal in an estimated $5.25 billion dollar project. The expansion will enable larger ships and more traffic to enter the canal. Once the canal project is complete the canal will be able to accommodate ships that can carry loads that are three times larger than those prior to the expansion4. Here are a few predictions for post expansion:

As the Panama Canal expands, more ships will be able to take advantage of the route. Not only can more ships go through the canal but larger ships can go through which have the ability to carry more cargo. 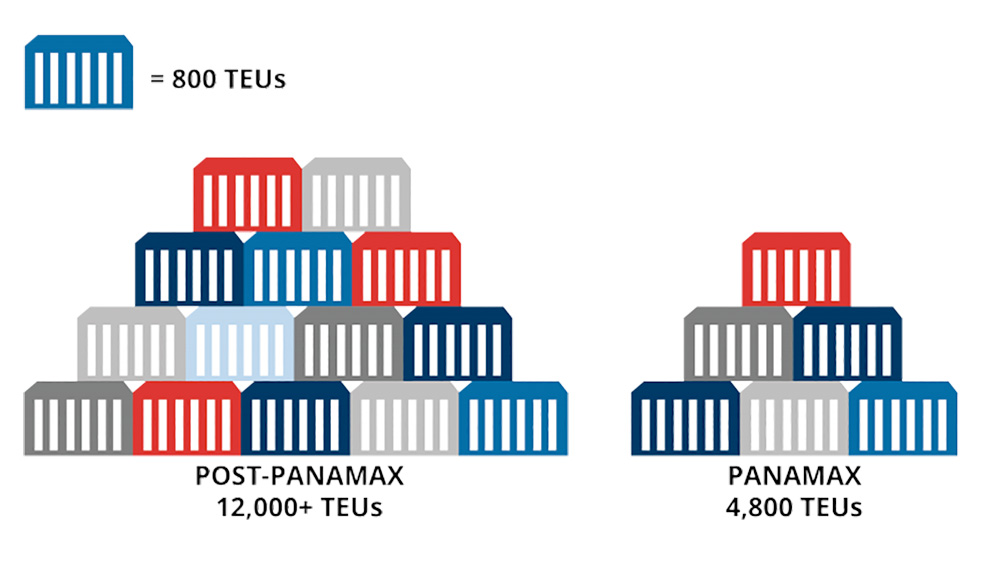 This also presents companies with a cheaper shipping solution. A recent study by the Pacific Maritime Association estimates that the shipping price levels can see a 12-14 percent drop in the years following the expansion in comparison to the shipping costs of using the canal today. The ships going through the canal will be larger which will lower the revenue per container5.

Recently we’ve witnessed what can occur when a port experiences problems as the West Coast port strikes had port traffic coming to a stop before reaching an agreement6. If another strike or unforeseen issue should occur, companies can plan to divert their cargo well in advance and take the Panama Canal route to reach capacity on the East Coast.

The expansion of the Panama Canal does present some possible issues. For instance, the East Coast ports to date aren’t prepared for post-panamax vessels. At this time only three ports are prepared for these ships which include Norfolk, Virginia; Baltimore, Maryland; and New York, New York. Expansions are mandatory for ports who want to accommodate these post-panamax vessels, and many ports have already started massive infrastructure projects. Aside from infrastructure, ports need advanced equipment to be prepared to handle the capacity that these ships can bring8. For instance, equipment like improved cranes and technology are being considered to be prepared for seamless unloading.

As traffic increases to the East Coast there will be more of a need for skilled labor and in exchange, labor rates will increase in the areas. The increased traffic at the ports will also bring interest for many companies to move business around the ports to accommodate for the increased freight. Some even predict a small industrial-surge along the East Coast but more specifically the South East.

The Panama Canal expansion is expected to be completed December 2015. As other ports prepare for their own infrastructure to accommodate the estimated traffic, it’ll be interesting to see how companies take advantage of the Canal and how global capacity will be met through-out the world.