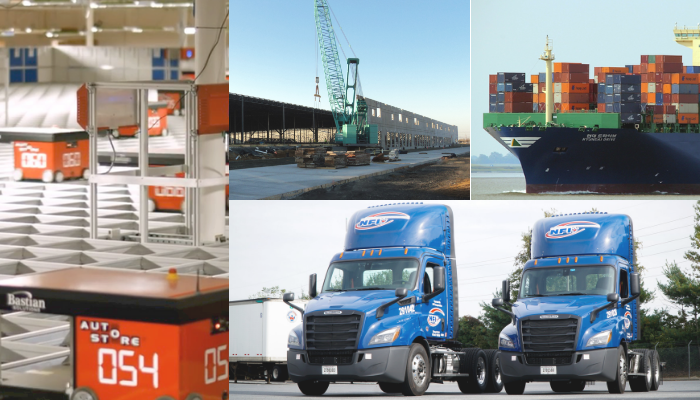 This past year, the supply chain industry evolved to accommodate numerous factors, such as advances in technologies like automation, tightening capacity, and the ELD mandate. NFI’s executive team shares their insight into the top trends of 2018.

NFI’s distribution and cross-docking business continues to grow organically and through acquisition at a record pace. 2018 will close the year out with NFI operating over 41.5 million sq. ft. of warehousing space across North America. Space vacancy rates are low and although a few markets have seen a recent softening in demand, NFI finished the year strong with increased space fill rates.

NFI invested heavily in automation and technology throughout our network of warehouse facilities. 2018 will be known as the year when everyone needed to reevaluate their supply chains addressing the consumers demand for next day, even same day shipping. The significant reduction in order lead time has continued to push NFI to find ways to increase speed and maintain flexibility in an ever-changing consumer driven marketplace.

Shippers looked to lock in capacity, in a greater way, with dedicated fleets in 2018 due to the continued growing driver shortage and overall reduction in carrier capacity resulting from the fully enforced ELD mandates. NFI’s dedicated model has proven to rise above the competition with our superior service, market competitive pricing, and ability to put the industry’s best drivers in our trucks and keep them there experiencing some of the lowest driver turnover in the industry. In an unprecedented way, all carriers needed to strategize their businesses, further enhance how they recruit and retain drivers, and further invest in technology driving cost out of the supply chain.

While a temporary relief in the price of diesel may have slowed down the eventual transition to alternative fuel types, NFI is focused on innovation and sustainability, closing out 2018 with further investment in the commercial electric vehicle market setting our path for the future.

2018 has been a year of acclimation for the transportation marketplace across shippers, carriers, and the 3PLs that operate in it. The year began with the introduction of the ELD mandate and a cold snap that pushed our market into a frenzy that has struggled to get its feet under it ever since. The first four months of the year saw steadily rising year-over-year costs connected to the high demand for moves related to both an incredibly tight driver marketplace and an economy firing on all cylinders.

As the year progressed, our market has found a degree of equilibrium which has helped to create level footing for shippers to work off of in order to get their goods to their customers. We look to 2019 to be a less volatile and more predictable marketplace that will help all in the supply chain stay focused on the penultimate goal – getting the goods delivered to the customer in a consistent reliable way.

2018 has been a busy year for those in the drayage industry. The year began with the ELD mandate and its somewhat unclear effect on the drayage business due to its overall short average mileage. As the year wore on and tariffs began to become a reality, the flow of goods to the U.S. became less predictable than in years past. This subjectivity in volumes has driven prices up while challenging both the ability of the ports to flow the goods and the providers to have the right bandwidth in the right places at the right time. We are looking towards 2019 as a more stable and predictable year.

The 2018 intermodal market was a year that started with promise and ended up being clouded by uncertainty attributed to service disruptions, labor unrest, and capacity constraints. Intermodal’s momentum in late 2017 carried through to the first quarter of 2018, but as drayage capacity became scarcer and service disruptions plagued Chicago and Vancouver, there were serious questions raised about how much throughput the North American rail system truly had. As the year wore on, the railways issued rate increases and managed to stabilize their performance while drayage scarcity eased in most major markets. The timing of this ‘stabilization’ more-or-less coincided with some of the highest western port activity in eight years. Those two factors led to much stronger demand for domestic intermodal capacity in California and an earlier than expected start to the UP’s peak season surcharge.

Canada had the added burden of dealing with two labor disruptions at the Canadian Pacific Railway, effectively eliminating 40 percent of Canada’s rail capacity and sending intra-Canadian long haul over-the-road rates skyrocketing. Some of that freight has not returned to the rail yet, but likely will throughout the winter months. Overall, intermodal carriers in both the U.S. and Canadian markets struggled to increase market share at the speed many expected them to, but recent performance indicates that they have set themselves up for potential success in 2019.

2018 was an unprecedented year in the world of Global Logistics. The industry was faced with a changing and volatile landscape due to new trade tariffs and space restrictions on capacity that entered the market. The demand for visibility became even more apparent. One of the biggest challenges facing the market is the inability to share data across the supply chain; information silos make it difficult to share data and to create collaborative processes between trading partners, carriers, and forwarders. Digitization is increasing across the industry and its providers, but issues like container visibility and capacity management still suffer from a lack of standardized data processing, visibility, and sharing.

With this trend toward digitization and the use of technology, forwarders face external competition and pressures from shippers, e-commerce giants, and the carriers themselves, who are also vying for a lead role in innovating the next generation of standards and service. Forwarders must prioritize the transformation of their relationships to these sectors and demonstrate the value forwarders provide within the supply chain by being on the front lines of technological advancement and managing fixed costs.

Shippers demand an ease-of-doing-business via top-notch visibility, a clean user-interface and an unrivaled value in navigating the complexities of global freight management, all added-value that a forwarder can provide. The key is working with their partners to position the forwarder as the lead on these new developments and are able to use all their assets to give a complete seamless door-to-door solution.

Industrial real estate has remained strong in 2018, with demand outweighing supply. Driven by growth of consumer spending, business inventories, and industrial production, 2018 experienced low vacancy rate and restrained new construction; vacancy rates went down to a historic low of 4.3 percent in Q3 2018, with an availability rate of 7.1 percent according to CBRE. Variables that have supported expansion include the integration of retail and logistics real estate as e-retailers look for physical outlets and traditional retailers expand their online footprint and restructure their warehousing network.